Prvi 32 Acp ammo  71 Grain Jacketed Hollow Point is a Handgun Ammo manufactured with the same quality and dependability built into the Starfire ammunition. All Prvi cartridges must pass through the rigorous inspection of the electronic powder check station. If the propellant in any cartridge varies by as little as two-tenths of one grain, the system stops, and that cartridge is discarded.

PPU PPD32A Defense 32 ACP 71 gr Jacketed Hollow Point (JHP)  – Defense Line Handgun ammunition is loaded with our innovative, proprietary jacketed bullets that maximize stopping power by providing improved expansion and maintaining bullet density. When protecting yourself and others the stakes are always high, depend on PPU quality, performance and dependability.

Despite being one of the oldest handgun cartridges, 32 ACP AMMO is still very relevant by today’s standards. And it makes sense. The .32-caliber round was designed by famed gunmaker John Browning, who’s responsible for creating some of the most pivotal designs in firearm history. Certainly, there are other more powerful rounds, 32 ACP ammo is ideal for small-framed concealed carry handguns or those older John Browning designs.

During testing, 32 ACP ammo equipped with a 71-grain bullet had a muzzle velocity of 900 feet-per-second and had 128 foot-pounds of energy. Extending the range by 100 yards, that same bullet will show a velocity of 798 fps and 100 ft-lbs of energy. Plenty of stopping power and range for a concealed carry pistol. 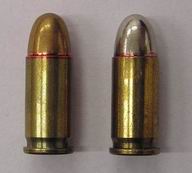 John Browning engineered a number of modern semi-automatic pistol mechanisms and cartridges. As his first pistol cartridge, the .32 ACP needed a straight wall for reliable blowback operation as well as a small rim for reliable feeding from a box magazine. The cartridge headspaces on the rim. The cartridge was a success and was adopted by dozens of countries and many governmental agencies.

When the .32 ACP cartridge was introduced, it was immediately popular and was available in several blowback automatic pistols of the day, including the Colt Model 1903 Pocket Hammerless, the Savage Model 1907 automatic pistol, the Ruby pistol and the Browning Model 1910 automatic pistol. The popularity of the .32 ACP in the early half of the 20th century cannot be overstated—especially in Europe. Firearms expert Geoffrey Boothroyd, of the UK, informed author Ian Fleming, his countryman, that James Bond’s sidearm should be a Walther PPK chambered in .32 ACP. A significant factor in recommending this round was its availability throughout the world in the 1950s.

Heckler & Koch produced the HK 4, their first handgun, in 1967. Twelve thousand HK 4 pistols were produced in .32 ACP for the German police and other government agencies.

Several long guns have been chambered in .32 ACP, from the Tirmax and Dreyse carbines to the AR-15-style Armi Jager AP-74.

The .32 AUTO  was intended for blowback semi-automatic pistols, which lack breech locking mechanisms. It was John Pedersen with the Remington Model 51 that delivered a true locked breech for the .32 ACP cartridge. The low power and light bullet of the cartridge allowed Browning to incorporate a practical blowback mechanism in a small pocket-size pistol. It is still used today, primarily in compact, inexpensive pistols, unless the pistol is used for ISSF competition, where the cost then escalates. Cartridges in .32 ACP are also sometimes used in caliber conversion sleeves, also known as supplemental chambers, for providing an alternative pistol caliber carbine function in .30-caliber hunting and service rifles.

Some comparison of the .32 Auto as defined by SAAMI and the 7.65 Browning as defined by CIP may be useful. Although some of the cartridge measurements differ by as much as 0.16 mm, the names are considered to be synonymous. However, the maximum average pressure – as measured by a transducer on the test barrel – is 20,500 psi (1,410 bar) according to SAAMI, while CIP allows up to 1,600 bar (23,000 psi). This may explain why the cartridges from European manufacturers tend to chronograph at higher muzzle velocities than those from American manufacturers.

Modern versions of the .32 ACP include expanding bullets and sometimes heavier projectiles. The lead-free hollowpoint expands reliably in a variety of media.

The .32 ACP is compact and light. While some believe it has marginal stopping power, it has been used effectively by military and police worldwide for the past century. Although .32 ACP handguns were traditionally made of steel, they have been produced in lightweight polymers since the 1990s. Their light weight, very low recoil and very good accuracy relative to larger caliber pistols make them suitable for concealed carry use. Some popular pistols chambered in .32ACP ammo are the Walther PP and the Walther PPK as well as the FEG PA-63, which is a clone of the Walther PP.

It offers more velocity and energy than the .32 S&W, which was a popular round for pocket defensive revolvers at the time of the .32 ACP’s development. Although with lighter bullet weights, the .32 ACP also compares favorably to the .32 S&W Long in performance. Some European 73-grain .32 ACP loads provide similar performance to the .32 H&R Magnum 77-grain lead flat point and 90-grain lead semiwadcutter.

Even though the .32 ACP is capable of killing small game, most handguns chambered for this round utilize fixed sights and are designed for use against human-sized targets at fairly close range, which greatly limits their utility as hunting handguns.

.32 ACP is one of the most common calibers used in veterinary “humane killers”, such as the Greener humane killer.

In Europe, where the round is commonly known as the 7.65mm Browning and features a different rimsizing, .32 ACP has always been more widely accepted than it has in America, having a long history of use by civilians, law enforcement personnel, and security forces, along with limited issue by military forces. During the second half of the 20th century, several European countries developed firearms for police, chambered in 9×18mm Makarov32 while chambering the same pistol for civilians in .32 ACP and .380 ACP. Examples include the Vz. 82/CZ-83 from Czechoslovakia, FEG PA-63/AP 765 from Hungary, SIG Sauer P230 from Switzerland, and P-83 Wanad from Poland.

WHere to FIND the 32 acp ammo for sale

There are no reviews yet.